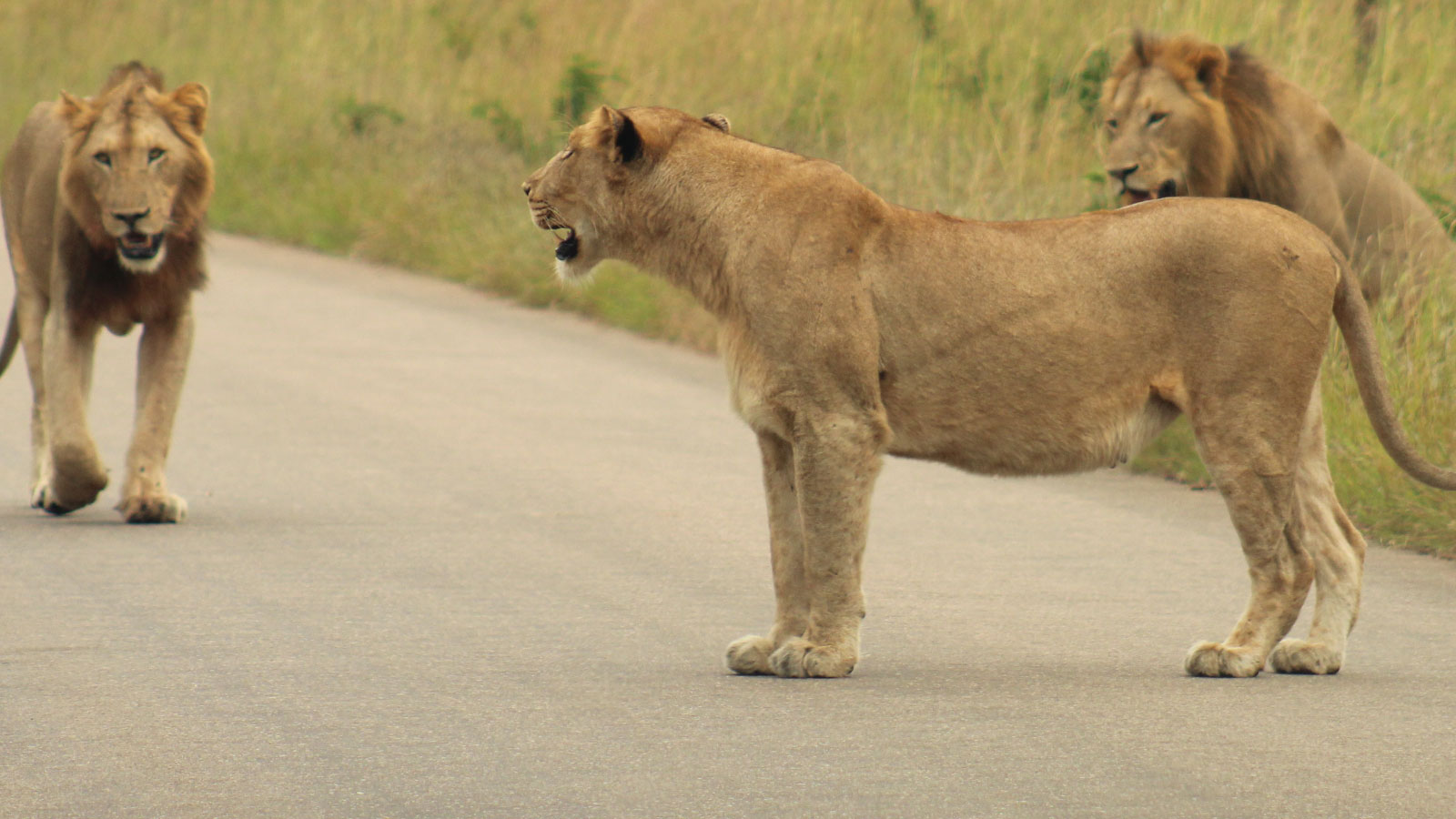 Getting to know the Big 5 – The Lion

Animals roam every corner of the vast landscapes of the Kruger National Park. They live as their ancestors did, tracking the same or similar routes, eating the same diets, drinking from the same water sources. Guests to the Kruger are in for an eyeful of once in a lifetime sightings, but while we get to see all sorts of animals, there will always be animals we yearn to see. And for many people, that one prized sighting is the lion.

You may see it on the television, on YouTube or in glossy magazines, but nothing prepares you for actually seeing the beast in the flesh. It’s indescribable. These big cats will look into your very soul when you encounter them on your Kruger Park safari and it is an experience you will never forget. Somehow the nobility of these creatures can make you feel small and humble.

Kruger Park safaris take guests into the southern Kruger, a region of the park well known for its lion prides.

The movies and books make the lion the king of the jungle, but we in South Africa know that his true domain is the grasslands, the intertwined greens and the dry river beds of the Kruger. The African lion is a tremendous animal and while they are found in parks across the continent, they are under threat and most of the wild populations live in the Kruger. Africa is not the only continent upon which to see these animals. Once they lived freely in Israel, Pakistan and Iraq. Human habitation drove these populations to extinction, and the best place to see a wild lion is now limited to Africa.

Its legacy is one of the reasons why most visitors to the Kruger National Park hope to see this animal in particular. Although all of the other animals that make up the Big 5 are just as amazing, it is the lion, with his bushy mane and ferocious roar, which guests are always on the lookout for.

The beauty, legacy and majesty of the lion are partly what makes seeing one such an unforgettable moment. As a member of the Big 5, guests from all over hope to tick this sighting off of their Kruger Park safari bucklist when visiting the park.

The number of lions living in the Kruger is not as numerous as it once was. There are only about 30 000 lions living in sub-Saharan Africa and a part of that small population lives in the Kruger. To keep them safe from poachers and to keep them out of mischief with the local farmers, it has become more and more important to preserve the species in conservation areas.

You could catch sight of them in bushy regions, but the lion prefers to spend its day out on the grassy plains. They are not tree animals. Often spotted in the southern areas of the Kruger National Park, safaris keep a keen lookout when travelling slowly through the area.

The lions of the Kruger live in the bushy, grassy areas of the park, where they can find plenty of shade. They are not well known for climbing and living in trees, and they like to live close to a water source, where their prey will stop for a drink. Their density is determined by the size of the prey population of an area. 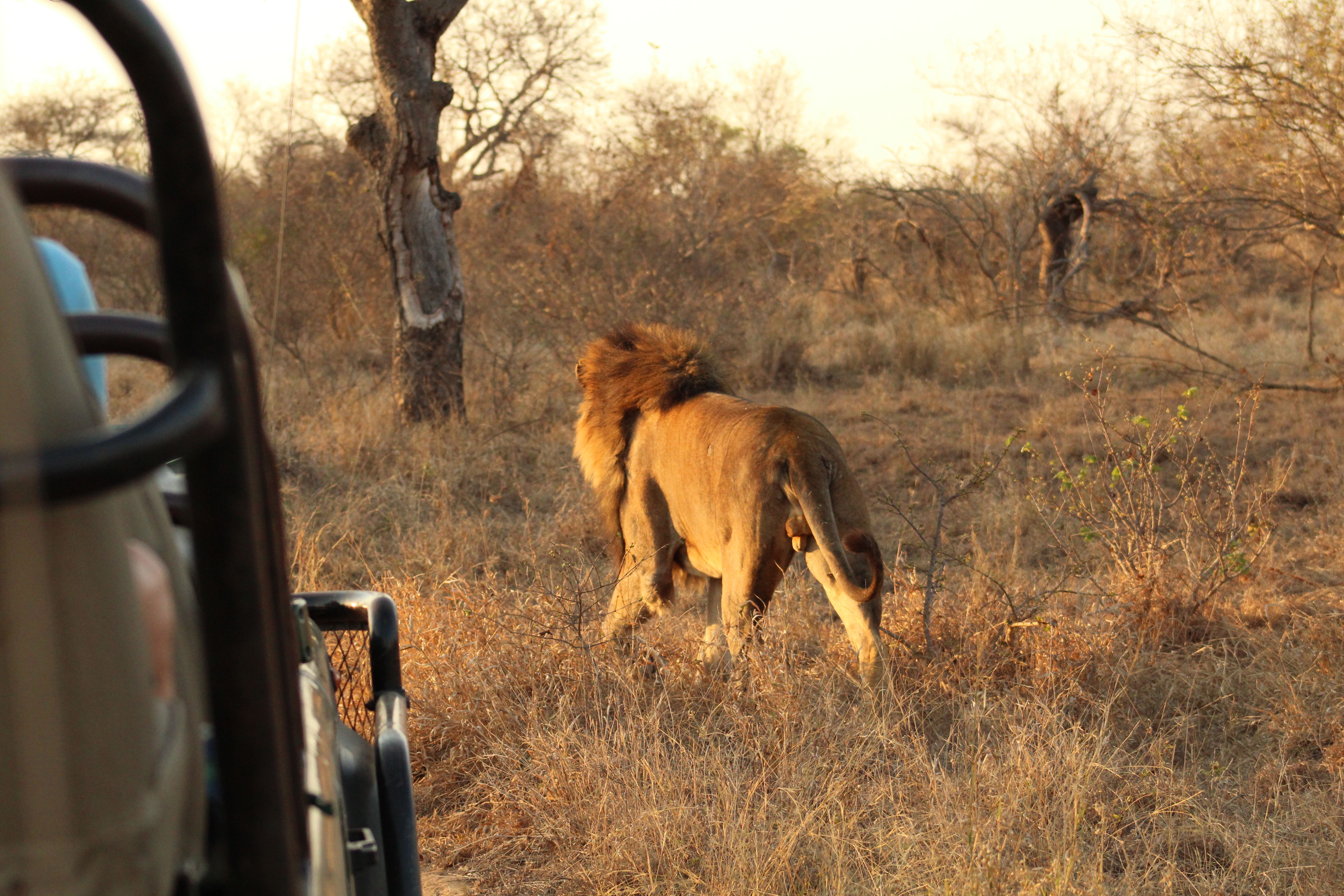 Lions are homebody, family cats. They live in prides with the females remaining with the family and males leaving the pride to form their own once they reach maturity. Male lions fight for supremacy in the pride, with their battle roars travelling many kilometres and the scars of their fights showing their struggle for the role of alpha.

When the females reach the age of 4, they start having cubs. A lion can give birth to a litter of 3 or 4 cubs and all the females in the pride become mothers to the cubs. As most of the prides females give birth at around the same time, caring becomes communal.

Females also have a reputation of being the primary hunters, but research has shown the male lions hunt their fair share for the sake of the pride.

When is the best time to spot a lion in the Kruger?

As with most cats, lions are known for being a bit lazy during the heat of the day and after feeding. There is no guarantee that you will see lions, but the best time to enjoy a Kruger Park safari, with the intent of spotting a big cat, would be in the early mornings and early evenings. During these hours the lions are at their most active. During rainy days, the cats tend to avoid being active as they don’t like the weather.

Wanyama Safaris takes guests on once in a lifetime Kruger Park safaris. We take our guests through some of the best known lion spotting routes in the Kruger. Book your safari with us and see wildest Africa!