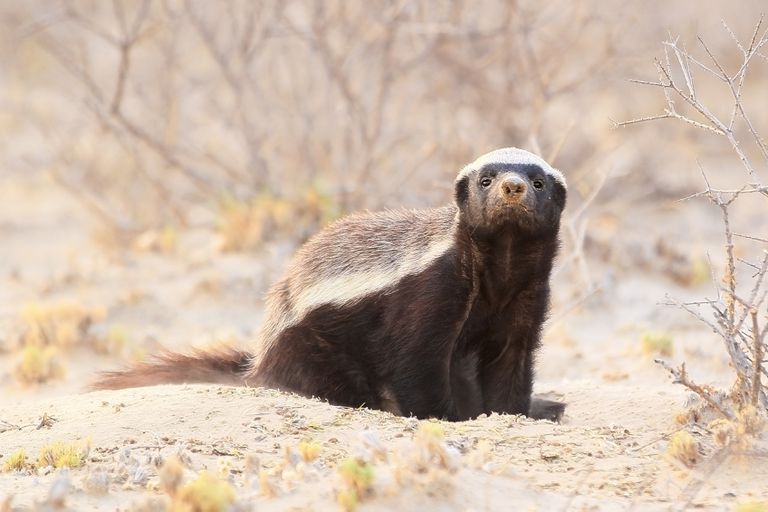 It is only those who are truly lucky who will get to spot a Honey Badger while on a Kruger Park safari. These elusive but amazing little creatures are fierce and unstoppable, and have earned a bit of a reputation in the animal kingdom.

Cute as they may seem at face value, the honey badger is a fearless fighter. They are about a meter in length and weigh a mere 12 or so kilograms but don’t let their size let you think that the lack strength or stamina.

The Honey Badger is known to chase lions away from a kill or even fearlessly attack a beehive.

Honey Badgers are solitary, predominately nocturnal animals. They feed on a wide variety of foods which include eggs, fruit, honey and also reptiles, insect’s larvae and grubs. Honey Badgers have a close relationship with the Honey Guide Bird that often leads them to the beehives. They can also take down larger animals such as a springhare or even a snake.

The Honey Badger has unbelievably thick skin that cannot be pierced with arrows or spears. Their skin is also very loose, making them capable of literally rotating in their skin. This helps when being attacked as they can turn to face the predator and fight back. When in this predicament they usually attack the eyes of the predator.

Honey Badgers are black underneath but they have course grey hair from their eyes to the base of their tail. Although they have short stout legs and tiny ears, they have massive claws. These they use for digging as they spend time underground. They also use their massive claws as weapons. They spend most of the time on the ground but can climb especially if on the trail of honey. They have an unusual jog-trot way of walking. When on the trail of its prey, they are tireless and will not stop till they have run their prey down. 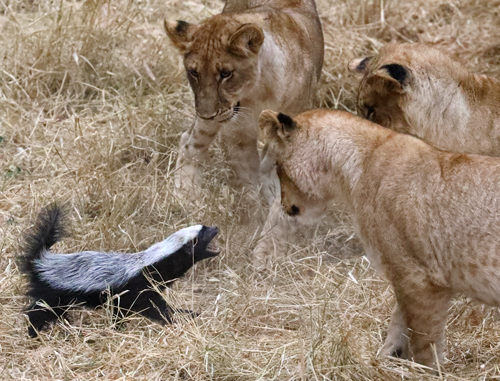 Honey Badger appears to be immune to bee stings or snake bites. It may not be that they are immune, but rather that the bees or snakes cannot penetrate the skin of the Honey Badger. Honey Badgers have been killed by mambas or puff adders, although most times it seems to go into a coma-like downtime and often recovers.

Honey Badgers don’t have a specific time of the year that they mate. After a gestation period of six months, they usually have one or two babies.

With all this knowledge, it is now understandable why the Honey Badger earned its place in the Guinness Book of Records and the Most Fearless Animal!

Perhaps you are one of the lucky ones who spot a Honey Badger while on a Kruger Park safari. Book your trip today.